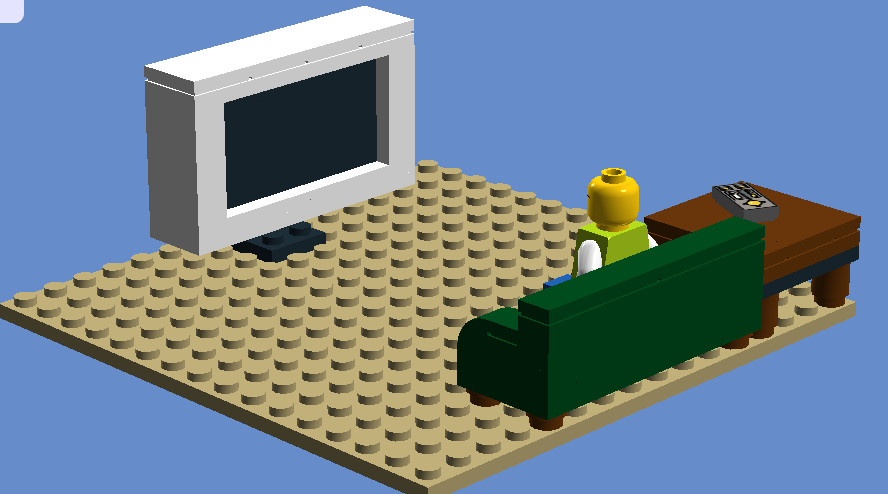 Couch, TV, and Side Table by TwoGuysBrickfilms, on Flickr

Something I put together on LDD. I really think that dark green would go well on the tan floor if it were reality.But I just don't have any dark green pieces.\

The TV is not bad I think, but I think the sides of the TV need to be thinner for a flatscreen TV.

Actually, flat screen TVs tend not to have visible edges. Especially in white. The one there looks like one of those old TVs that were gigantic and silver and required half of your living room to even fit. Maybe if the border was black, and thinner, like you said, then it would work better.

A plain TV built with bricks or tiles and no edges often looks great, though if you want one with a slight edge, I'd advise using the newish brackets that have a 1x2 SNOT area that go up instead of down. Put them on the back of a plate, put tiles on the plate, and put tiles across the brackets. This will create an edge that is only a half plate deep, and one and a half plates wide. Though, it will take a lot of brackets depending on how large the TV is.

I'm not sure what element you're talking about, but mentioning SNOT gave me an idea. When I googled Lego TVs before building this one, one of them (it kinda looks like the one I built) uses SNOT for the screen, but I have an idea that might be better. I'll build one up and post a screenshot later.

I was referring to this one: http://www.bricklink.com/catalogItem.asp?P=99780

I look forward to seeing your idea!

I have no idea if this is the right place to put this, because this topic is in the Bricks section, but mine relates more to non-brick aspect of the set design. 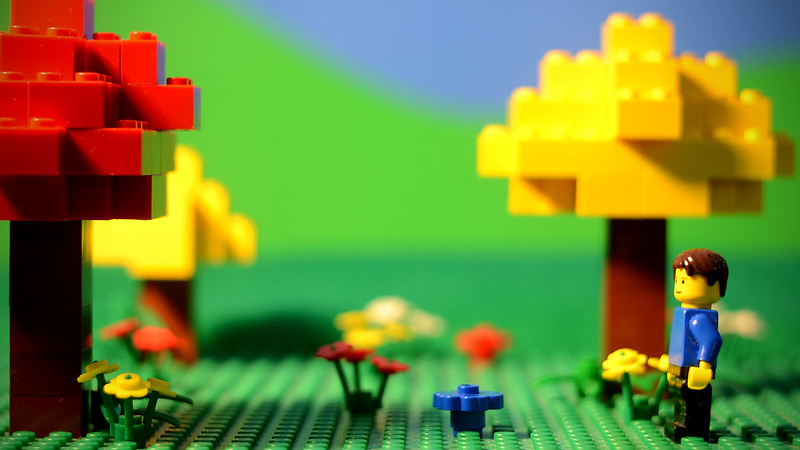 I am trying new techniques for brickfilming, and this is one of them. I was inspired by the simplistic set designs of Rudolf the Red-nosed Reindeer and other old stop-motions like that. So this is a test of my new backdrop. Basically, instead of using only a blue posterboard for the sky, I am using a green cutout that looks similar to hills in the distance. Unfortunately, it does not match the green of the baseplate and felt (which is used for that closer hill).

Rio, it looks good. It is true that the color of the back hills doesn't completely match the green, but it helps add depth.

That's really cool. I'm surprised it hasn't been done sooner.
It's a great way to have a basic background, yet avoid the "big blank blue sky" syndrome.

I like the brick-built nature of the trees, but how they look classic, not like flat leaves elements on 1x1 round brown bricks, so common from TLG models!

I agree with HOO.

There is a shadow cast onto the felt from the back tree that I recommend removing by changing the angle of the lamp.

EDIT: Here's an updated version of the TV. Top, I couldn't figure out a way to use the piece you specified to make the edges of the TV, but it is used with the larger TV to hold up the 6x10 plate that is sitting there sideways.

There is a shadow cast onto the felt from the back tree that I recommend removing by changing the angle of the lamp.

It might be better to just move the background back.

Also, if you have some more green plat in the shot, it will be more easily blurred into the hill, making a more consistent image.

I usually just build rocky hills, though.  I feel like the grey really brings out the characters.

Thanks for the comments guys.

@Tenny, which size TV fits a minifigure's house better? I think the largest one looks the best, but the medium seems to be the best sized one.

Here's an update on my background test: 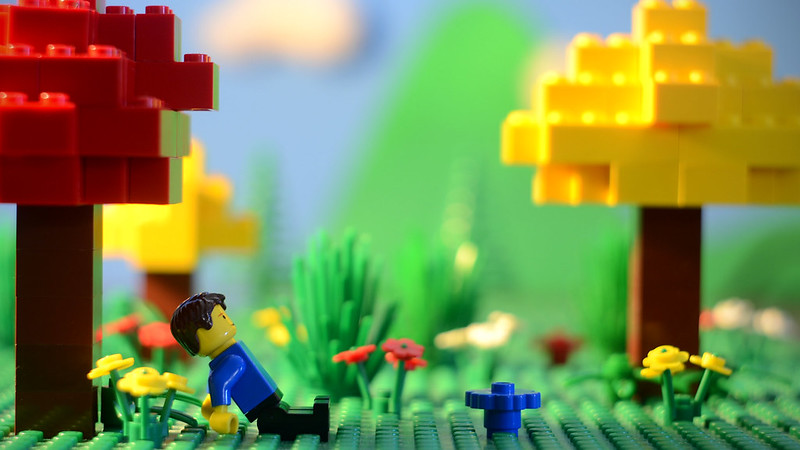 In this one, I painted the hills background with watered-down blue paint to decrease the intensity of the green and to give the illusion of depth (you know, like when mountains turn blue in the distance but are not up close?).

I used a piece of cotton for the clouds (real cotton from a cotton plant, because I didn't have any cotton balls accessible at the moment, that's why it looks so dirty and not as white as it ought to

), and improved my lighting. I also removed the felt for the extending ground, and instead added a couple more baseplates with two trees on them to make the landscape larger.

@HOO The idea of the trees came from Legendary Brick Studios' short Spring. I have a distinct lack of those new tree-leaves parts, so I thought I'd use the brick-built trees, which I really like.

@Squid I did notice that you tend to use gray slopes for your backgrounds. I really like that technique, and wish I could try it, but I have a lack of those bricks too. Basically, I have mostly basic bricks and not many of the newer parts. Thus, I am resorting to cheap non-LEGO solutions to add depth to my films. I think it's also helping me develop a distinct style, which I have been wanting for a while.

It looks much better. The first thing that I noticed was the shadow behind the cloud. In the real world, clouds usually don't cast shadows on the sky behind them. However, I do like the look of the shadow. Whatever suits your taste.

@Tenny, which size TV fits a minifigure's house better? I think the largest one looks the best, but the medium seems to be the best sized one.

The larger one could be the huge 78" HDTVs, and the medium might be a 42" HDTV, in terms of mini figure scale.

Nice trees, rioforce. I particular like the fact that you used classic bricks rather than the newer fall-colored leaf pieces. Nothing can ever replace the look of classic LEGO bricks.

I think deal with the shadow behind the cloud and your golden, it looks really good, much better than the last version.

Thanks for the comments.

I did notice the shadow behind the cloud. I saw it before I took the picture. The thing is, I actually like the shadow. I think it gives it a unique stop-motion look. I'm not trying to imitate real life here (obviously, I mean, it's a piece of paper for the background with square trees

). I may try a bit of experimentation on how to remove the shadow, though.

By the way, I posted a new frame that is related to the last two in this topic (if ya wanted to know):

I've been building my first actual set for a brickfilm. I have it about 87% completed. The only main things I have left are to add the rest of the path and add foliage. However, before I add the final details I was wondering if you have any advice.

Don't worry about the lighting, that will come later. (Yes, I did get the idea of bricks for the leaves from Rioforce)

Looks nice! Reminds me of a 2.5D video game. The trees casting a shadow on the sky could cause a problem, but other than that. I really like it.

Don't credit me, though, credit Legendary Brick Studios. That's who I got the inspiration of brick trees from anyway.