Greetings, Bricks In Motion!  Despite my absence on this site for almost a year, I am still very much alive and well.
I have been itching to do another serious film ever since THAC X, but unfortunately, I have been very busy graduating high school and applying for college among other things, such as enjoying my summer with friends and family.

I was not to able enter THAC XI because my laptop has been running in safe mode for the past few months, and it would have been a nightmare trying to film and edit in 24 hours without the use of my filming and editing software.  I guess I could have borrowed someone else's computer, but that would require more effort than I was willing to put in.

But regardless of missing THAC, I think it's about time for another film.

I wanted to share an idea with you guys, and if I go ahead with it, it will be without question my most ambitious project yet, so any feedback or suggestions would be greatly appreciated.

Right now, the title of my new film is "One Shot", and will probably run somewhere from 2-5 minutes.

I don't have a particular story in mind, I just want to make an all-out action film, so the story is really more of a mission.  It follows some sort of secret agent on a mission to infiltrate an enemy base, steal valuable secrets of some sort, and make a daring escape, and in the process, blowing up the base in a spectacular fireball explosion.  He has "One Shot" to succeed in his mission, because there is a lot at stake, and failure is not an option.
I will develop a back story if the need arises, but at this point, I don't have plans for any dialogue.

Sounds pretty simple, right?  Well not really.  There is another key reason why the title of the film is "One Shot".
The whole film will consist of ONE tracking shot (no cuts allowed), with the camera moving in and out of the action throughout the entire film.  This is the main reason I consider the film to be so ambitious.  I have pulled off some very difficult tracking shots such as those in my film "The Machine", but those would all pale significantly in the scope of this project.
Of course, I will NOT be filming the entire movie in one shot.  I will be filming as much real animation as I can, then I will use greenscreening, matchmoving (motion tracking) and CGI to stitch the shots together.  Some people might consider this to be "cheating", but I simply do not have the resources to film the entire thing in one shot.  Regardless of "cheating" or not, this film if completed, will be a major feat in brickfilm cinematography.

I am working right now on a relatively simple matchmoving test to make sure that my software, Blender, can deliver the matchmoving capabilities I need.  I will post it here when completed.

Here are some technical details:

So yeah, that's my idea.  I have completed about 2.5 pages of story boarding which comprise the first 20-30 seconds of film.  I can post those once I scan them if anyone is interested.

This project is entirely in the planning stage right now, and given the nature of the cinematography, I will need to storyboard everything down to the second before I begin shooting.  Like I said earlier, questions, feedback, and suggestions are greatly appreciated.

I love long shots/One-shots, (Even tried a one-shot myself) and can't wait to see what you come up with. I suggest looking up as many one-shots/long-shots as you can to get an idea of how to pull one off well. The Adventures of Tintin had a nice long one, and it shouldn't take much Googling to find more.
Doing an entire film this was will be hard, but it would also be amazing.
(Especially with your animation skill and overall all excellence.)

It's great to have you back by the way, I've missed you.

Sounds cool (especially the one shot with no cuts part)

Go for it dude. Tracking one shots are awesome, and is a huge achievement if you do this.

It sounds awesome, but will certainly be quite a challenge. I think you should go for it, you seem capable enough, everything you've done up to now has been amazing. I wish you luck.

The tracking shot is what'll make this amazing. I can't wait to see how you pull it off.

I'm curious to see part of your storyboard, to see how you do it!

@Pritchard  Yes!  I love that shot from Tintin!  Also, the new movie "Gravity" had a bunch of those shots.  In fact, I think the first shot was over 13 minutes long.  Haha, I guess I've missed you too, btw. 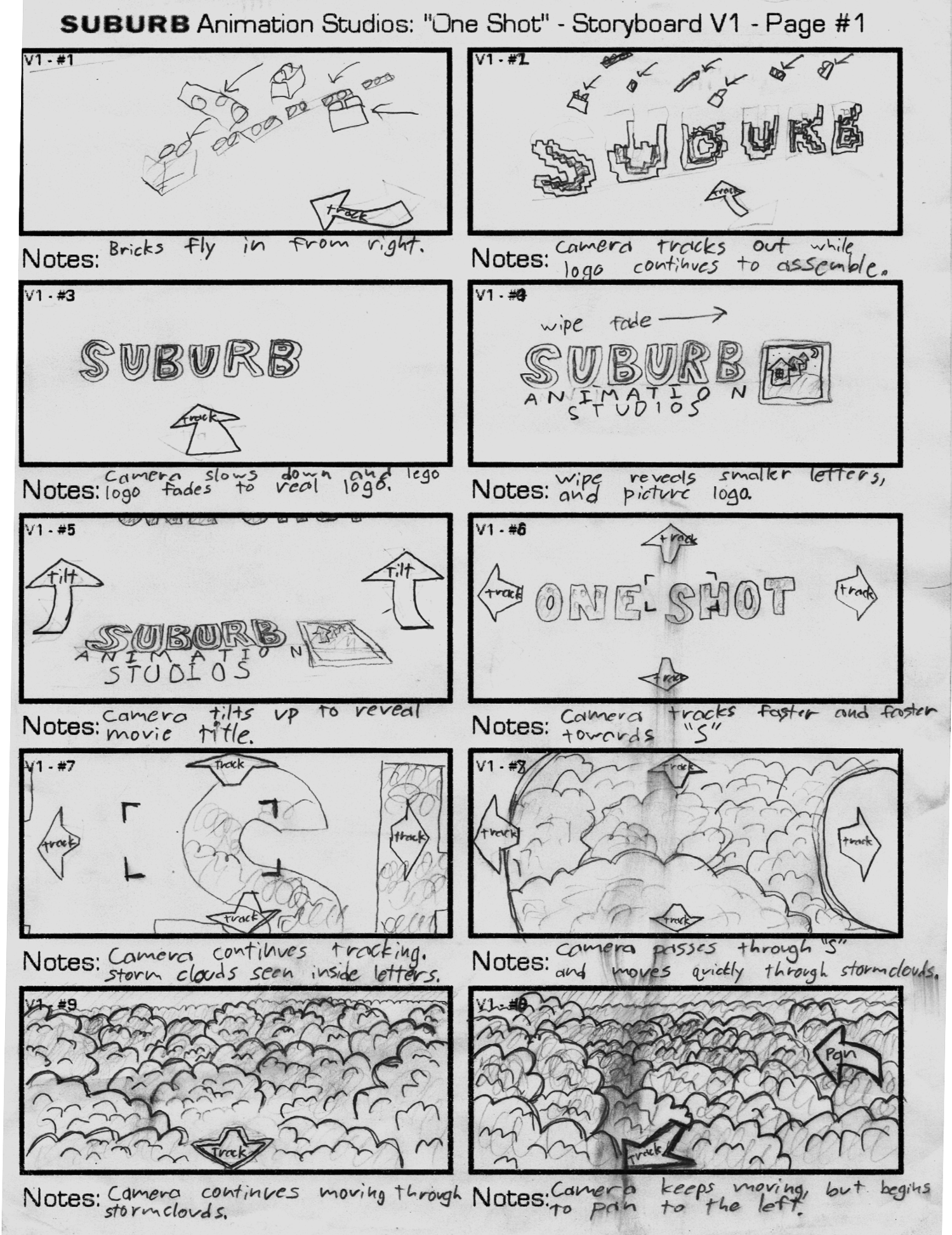 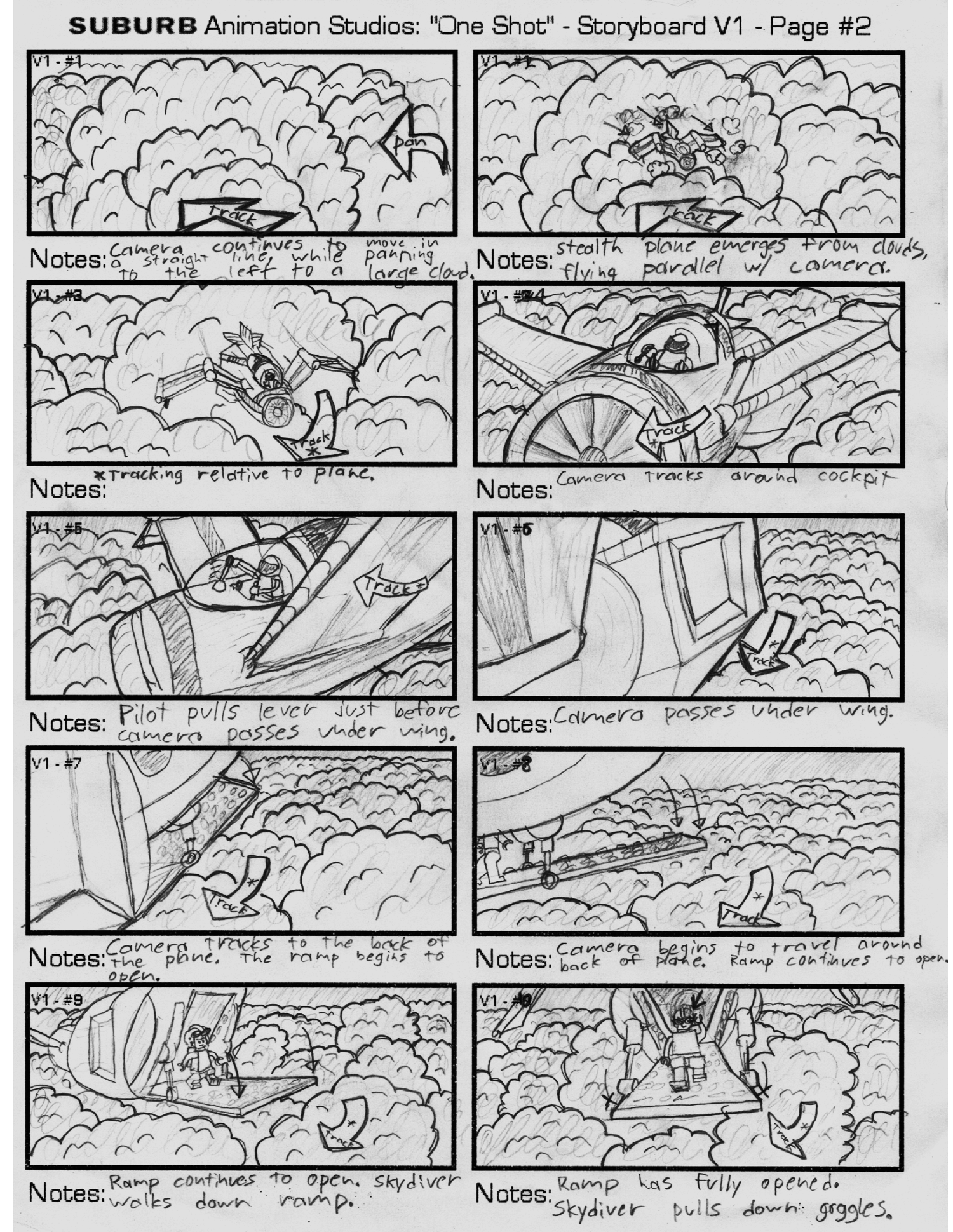 Yes, I know the plane looks goofy.  I will probably re-design it to look more stealthy.

Also, here is the matchmoving test I was working on.  Let me explain a little about it.
The video is a handheld shot I filmed using a camcorder.  The Lego structure was hung from the ceiling with fishing line, and is supposed to be a ramp at the back of a large plane (the one seen in the storyboard).  I used Blender to track several of the tracking dots in the background, along with several features on the structure itself.  Blender then used the track points to calculate the motion of the camera.  I used that digital camera motion to render the inside of a sphere with a cloud texture.  I had not originally planned to add a sky background, but amazingly enough, AE was able to key out almost all of the background, including the tracking dots.  In Blender, I imported two large lego piece meshes (from MLCad and LEOcad), and positioned them on either side of the model.  When rendered, the CGI legos match the movement of the real Legos.  Of course, it's just a test, so the tracking and keying is not perfect, but considering that I filmed the shot without much preparation at all, I think it turned out fantastic.  When I film the actual movie, I will have better tracking dots, and a better greenscreen/bluescreen.  Anyways, here it is.

If you can pull this off, jeese it will be mighty impressive. I love the idea, and with your previous work, I think it is entirely possible that you can execute it. Good luck!

This looks like your most amazing project yet!  I like all of your films.  I've never seen something like this before.  It should be amazing!  Especially at 25 fps!  I can't wait to see the final product!

The storyboard makes me even more excited. Good luck on this, dude!

Hey guys, sorry I haven't been around lately.  I'm back from a busy semester at college, and hopefully will now have some time to work some more on this project.  I really haven't done a whole lot since my last post, except for some motion tracking tests, which turned out great. (Here's one: http://youtu.be/fAM_o_DdsXw  At this point, I need to finish brainstorming, storyboarding, and scripting (if any), so any suggestions or ideas to help make this an awesome film would be really helpful.

Whow, i'd love to see a movie by you like that! Not even because of your awesome animation in general, but the one take thingy really is a great idea and i love to see how it'd turn out. I didn't know about this before so i browsed this topic, i have to say that the greenscreening on the previous test wasn't perfect. Yeah, that's why it's a test, but i just don't like it. Also, i never liked CGI Lego shots that much, maybe you can replace those with real bricks? The VFX breakdown looks absolutely amazing and very realistic.

I disagree with Wout, I think the test was actually quite good. I'm assuming the CG brick you added to it was just a placeholder, and you will probably retexture it? (I don't know modeler language so I don't know what it's called when you add textures to make it look realistic.) The keying looked okay to me as well.  Good luck with this project!

Yes, the bricks are just placeholders.  I will probably try to add more realistic lighting and textures for the finished bricks.  During the actual production, I will have the sets actually stable, instead of hanging from a single string, which would account for the imperfect matchmove.  The keying was not originally planned, but I was able to key it surprisingly well, so I decided to keep it for the test.

At this point, I need to finish brainstorming, storyboarding, and scripting (if any), so any suggestions or ideas to help make this an awesome film would be really helpful.

You asked, so I thought of something.  Of course, I am assuming that your main character has some sort of gun that he's using.  Perhaps you could have him run out of ammo and have a part of it be a hand-to-hand combat scene against one soldier.  Or more, if you'd like to be more ambitious.  Just an idea!

I tried a long-shot in ANZAC, and whilst it could have been better, if there is one advice I can giver you, it would be to use onion skinning to your advantage. Don't be afraid to bump the camera, because it can sometimes break up static shots, which don't usually work when you want the camera to be constantly moving.