As our summer animation contest Darkness and Light comes to a close, it's time to look back at what brickfilmers have achieved in lighting and cinematography over the years, and explore some possibilities for the future!

It can be easy to fall into the trap of settling for flat, unappealing lighting, regardless of the content of your film's story. There is a a place for high-key lighting, but with the advent of DSLRs, high quality webcams, and instant online HD video publishing, making sure that everything can be seen clearly in your finished film isn't the challenge it used to be.

The exciting thing about these advances is that they open up opportunities to explore bold, creative lighting design in our films. We can use multiple light sources with color and careful composition to paint with light, much like a live action cinematographer does.

As Jacob Swinney's video compilation of cinematography from 2014 demonstrates, creative and dramatic use of lighting comes in many forms. Stop-motion films like ours have an added benefit: because of the static nature of the LEGO characters and sets, cameras with manual shutter control allow you to produce clean images in even the dimmest lighting conditions:

I'm using an example from one of my own films here because I know it was lit primarily by old Christmas tree lights that normally wouldn't produce adequate light. With the help of slow shutter captures of the scene, the necessary exposure was possible. Brickfilms are perfect for creative solutions like this, because of the small scale and re-buildable flexibility of the sets themselves.

Of course, there is room for more sophisticated lighting technique in brickfilming as well. As Chris Boyer explains, he built up a collection of Mole-Richardson lights for his movies over the past several years, used to impressive effect in recent projects like his short film Subterranean.

With careful use of gels, Boyer lit a piece of foam board to create a sunset background in-camera. He also made use of the lights' barn doors to shape the gradient texture of the sky. For a more detailed look at the process, see the behind-the-scenes video.

Of course, lighting is not only about making contrasty, dramatic images that look cool. Boyer's film uses these dramatically lit images to create a sense of atmosphere. In designing the lighting style for a film, it is important to think about how the story can be better communicated through the film's visuals, including its lighting.

The examples covered here, and the Darkness and Light competition, have primarily focused on shadowy, chiaroscuro lighting styles. Lighting can be interesting and contribute to a professional feel for your film without being shadowy and high-contrast, however. Spencer Katz's hilarious short Ham On Set demonstrates how well-executed, soft high-key lighting that leaves some room for texture and contrast in the image can create a visually dynamic result.

Not all brickfilmers have access to expensive lighting equipment, but it is still possible to begin putting more attention to detail into the lighting in your films. With creative use of even basic lamps and relatively inexpensive lighting gels, it is possible to greatly enhance the texture and atmosphere of your film. Tools like black wrap (sometimes called cinefoil) are also helpful for shaping light for your shots.

Before you attempt complex lighting, it is helpful to have a fundamental knowledge of the principles of movie lighting. What is applicable in live action generally applies to a brickfilm as well. An understanding of traditional three-point lighting, for instance, will serve you not only in creating a traditional three-point lighting setup, but also when you want to break away from this. It provides a framework to start from.

Nikolas Jaeger's brickfilm The River is visually effective for where he doesn't place light as much as for the light that is present. The use of key light without fill, for instance, or backlight without key and fill light, create dramatic silhouettes and textures that give the film its distinctive aesthetic.

Painting with light isn't just about pointing some lamps at your set until it looks alright. It means carefully balancing color, light, and shadow in interesting ways that complement the story you are telling, not simply showing off. To quote Roger Deakins: "If there’s an achievement to lighting and photography in a film it’s because nothing stands out, it all works as a piece. And you feel that these actors are in this situation and the audience is not thrown by a pretty picture or by bad lighting."

Have you ever made an effort to create more meaningful, cinematic lighting in your films? How did you accomplish it?

In a lot of my films, I have light flicker problems. So In my D&L entry, The Transfiguration, I placed two Boxes either side of my set, placed a box lid over the two, and used cold white spotlights. My spotlights only project a small amount of light, and it doesn't work with a day time scene. As the scene in my film is supposed be at night, I think the lighting looks alright. One of my main objectives was to make sure the lighting had no flicker and looked persistent.

I've been trying to make my lighting better over the years with some success.  Although, I'm not exactly sure how to convey emotion with lighting, really.  Usually I just try to make some thing that looks really nice.

I think that the best lighting I've done so far in a released film is the throne room from Odoriferous. 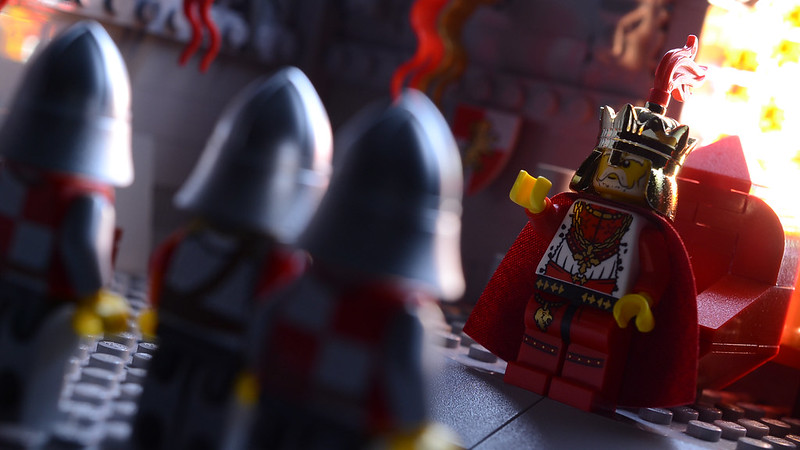 Having the big fancy window behind the King makes him look really big and important, which I think is pretty cool.  I'm also really fond of how it reflects off of his crowns and the helmets.  My favourite thing about lighting these plastic characters is just how shiny everything usually is.  Although I also really like how the light also shines through the fabric and you can the that in a way you usually don't in a brickfilm.

I also like how in Ella's Tale I used a spotlight to make Ella's study feel more like an empty imagination rather than building the study properly.

I think that the best lighting I've ever done yet is in Welcome to Darkmoor, where the film is in greyscale, but for a few specific shots there are red light sources (an explanation for how I do this technique is detailed here).  It can be a bit time-consuming to make such shots, but having the red light shine upon the grey set has a very interesting look to it with an eerie contrast, which I think benefits the overall creepy tone I'm trying to do for this film.
(Unfortunately, though, it's not going to be out for some time, as it's now too late for my to make my planned October release)

Rioforce also does some really cool lighting in his films.  I especially like his use of different coloured light sources.

For this contest, I tried to get some depth in the film. I put the 2 lamps behind the set to give it a dark, eerie feel. I put in some lensflares, (which are quite dim) but I Think it turned out all right.

Well, obviously I've been trying to up my lighting game for the Darkness and Light Contest, and I certainly feel that said film has some of my best work. It's amazing how a bit of shadow can really give a sense of mystery to a persons face, or how dangerous another may look when silhouetted against a small window.

But even before this summer, using dramatic lighting has really been something that I've put a lot of effort into. Thus, over the years I've acquired quite of bit of Lifelites, as well as several flashlights and some other fun things beyond my basic desk lamps. But like Squid, while I've been trying to convey a feeling, it often just becomes a game of 'what looks cool.' But I guess that works.

Secrets in the Shadows and If Rooftops Could Talk both use low, colored lighting to (What I hope is) excellent effect. My boxing video made use of Christmas lights around the top of the set to give it a softer feel, as well as several unique layers of shadows. And then, most recently, I used a single lamp, then stuck lights into some rock monsters to get this look for my animation challenge entry.

I made use of some less-static lighting in my BRAWL entry, specifically in this shot: 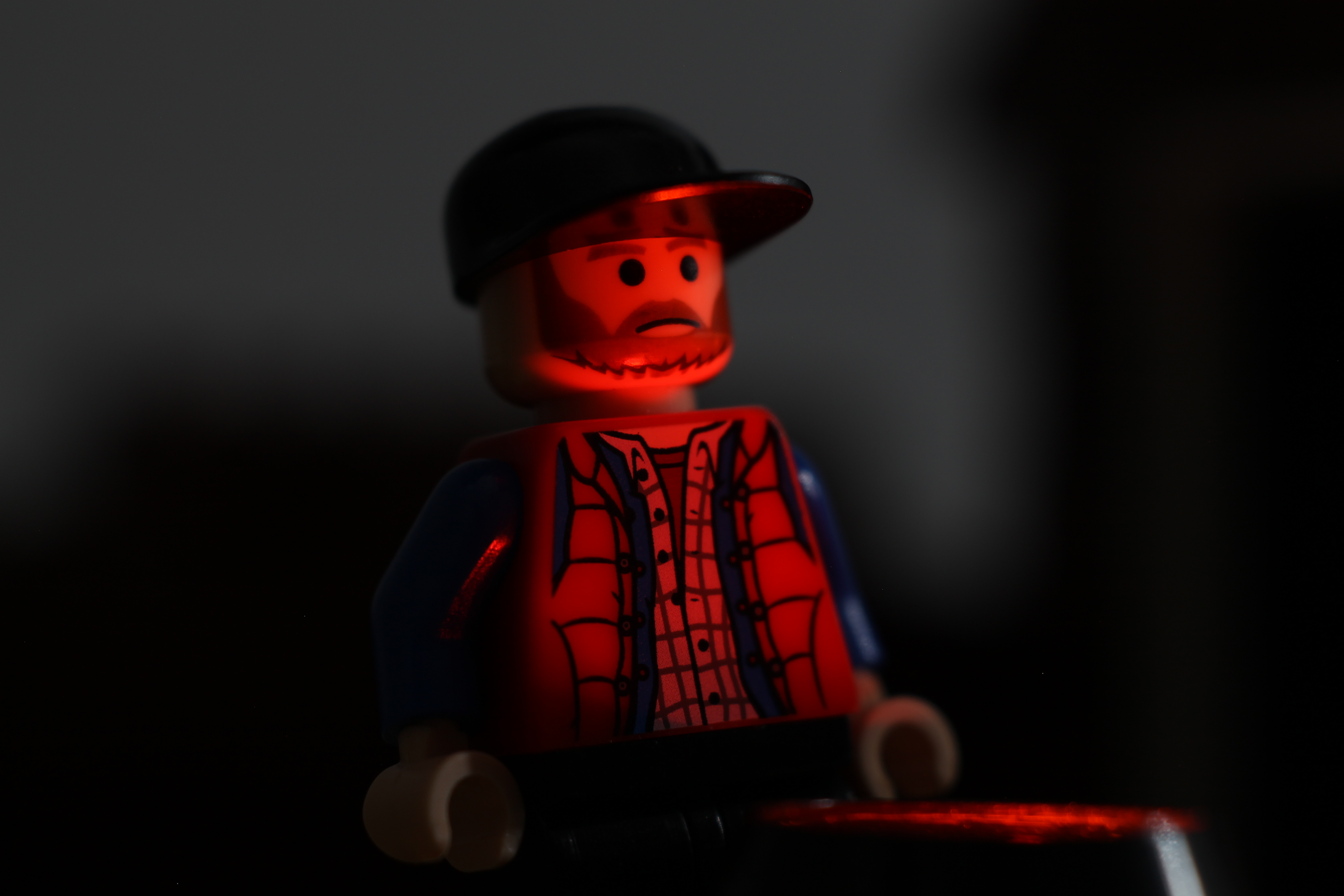 But I plan on experimenting with it more in the future. For this shot I actually just used a set that I built around an iPhone (thanks to Squid for that recommendation) but I just ordered Brickstuff lights for my next film and I think that should set my lighting apart. Seeing films that aren't lit fullbright is always exciting for me, because lighting can often bring a whole different layer to the storytelling. I'm excited to see the Darkness and Light entries for this reason.

I love to play with light, it's one of my favorite parts of brickfilming, even photography in general. I try to push my limits and creativity in lighting for every film I make. However, I can't say that all of my lighting attempts have been the most realistic. In the Captain D. Rom films (especially "The Surveillance Situation"), and in my comedy films, I tend to just do what looks cool. Like this. Where in the world is a pink light and that giant lens flare coming from?

However, in my more serious films, I try to think about what emotion my light is bringing to the film. I like using multi-colored lights, but not if it has nothing to do with the emotion and the film itself. I also like to play with shadows and do fun things like conveniently lit faces:

I also find that bounce lighting is really cool, it is great for filling in dark shadows indirectly. I often use an 8x10 piece of white painting canvas to reflect light, it make a really cool effect. Using colored bounce boards is also fun to do.

While I missed the window to enter this contest, I've been playing with lighting to try and get some fun effects in my (very limited) brickfilms. The first attempt was for a brickfilm I made celebrating Batman's 75th anniversary: https://youtu.be/3KEHa6WcgKs. While the subject matter is a bit silly, I really wanted to create dark and moody lighting. It certainly helped to make a somewhat iffy storyline look good. My second attempt at "serious" lighting was for a Halloween brickfilm. I wanted this one to have a spooky look that contrasted the light "children trick-or-treating" storyline. See my "Walking Dead... Brick or Eat" short here: https://youtu.be/_Jb0p198WOw. I'll admit, doing the lighting was more fun for me than the animating! I would love to hear any critique or feedback!