BRAWL 2016 has now started! Please continue any discussion in the new thread. 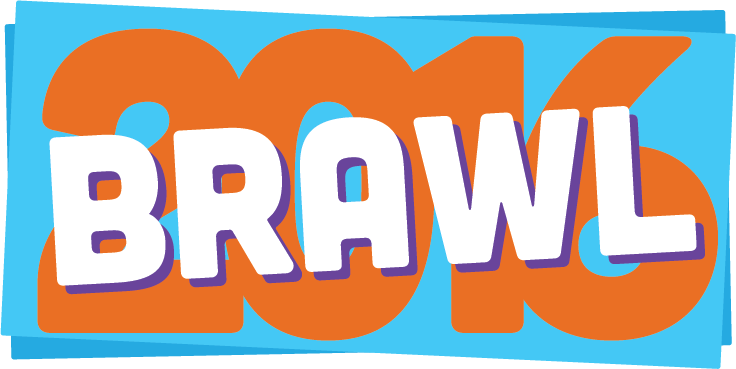 A thread titled "BRAWL 2016 Starts NOW!" will be posted in the Contest & Festivals forum. The thread will contain the theme, MOD elements, submission information, and a summary of the judging process.

Rules & Requirements
• Your film must be entirely made and submitted during the 1-week period. To prove this, films must follow a theme and include MOD elements that must appear in every shot of your animation (more information in "Theme & MOD Elements").
• Films must be animated and must be primarily composed of stop motion animation. Flash, 3D, or other animation techniques may be used to supplement stop-motion but, it may not be the main focus.
• Films must contain LEGO or similar 'brick' construction toys, such as MEGA Bloks.
• There must be at least 30 seconds of animation in the film. There is no maximum length.
• Films may not contain adult language, racist content, excessive graphic violence (blood and/or gore) or sexual themes.
• You may make up the three entries. If more than three films are submitted, the first three films received will be accepted. Any films received after the first three will be disqualified.
• You may NOT make your film public until after the deadline.
• Films must clearly show the linked BRAWL 2016 logo for three uninterrupted seconds. The logo may be inserted digitally.

Guidelines
• Joint entries (collaborations) are allowed, but please specify every person or group involved with the creation of the film when submitting.
• While copyrighted/trademarked properties are allowed, you are discouraged from basing your movie off of pre-existing films or franchises (Star Wars, Marvel, & etc.). Use your imagination! Creativity is encouraged and awarded in BRAWL.
• Copyrighted, royalty-free, and original music pieces may all be used during BRAWL; original music pieces do not have to be made during the one week time limit.

Theme & MOD Elements
To prevent entrants from creating their films ahead of time, a contest theme, that entries must include, will be announced when the contest begins. In addition to the theme there will be two "MOD" elements. The MOD elements are visual elements that must be included in every shot of your film

The contest theme can be interpreted a number of ways, it can be integrated into the story of your film, a character's personality, or in your approach to creating the film. It is encouraged you to take a creative license in your interpretation of the theme. As long as the theme can be identified in your film.

There are two kinds of MOD elements, the first MOD element is a color MOD. This will be a combination of two brick colors connected or touching each other (for example, a blue brick connected to a green brick). The second MOD element is a letter MOD. This could be any of the 26 letters of the modern English alphabet. You may use the uppercase or lowercase version of the letter, but the letter must be recognizable as that letter.

• The letter may be upper or lower case, but it still must be clearly that letter. The letter can be rotated but not mirrored. Again, it must be clearly identifiable as that letter. It may be written or printed on a piece of paper or sticker, drawn directly onto a brick, printed on a piece, or built from pieces and even integrated into the set.
• The letter MOD element may exist on a printed LEGO piece, but it must clearly be that letter. An eyebrow or wrinkle on a minifig’s face, or a fold in the shirt on the minifig's torso are not letters.
• The MOD Element may NOT be inserted digitally. It must be physically present in the shot.
• You do not need to include either MOD element in the titles or credits.
• If a shot must be clarified by changing the shot in anyway (i.e. changing brightness, black and white to color, & etc) to be able to identify the mod element, the shot will not count as containing the mod element.

In addition, films must clearly show the linked BRAWL 2016 logo for three uninterrupted seconds. The logo may be inserted digitally.

Judging & Prizes
The judges for BRAWL 2016 are Nathan Wells, Squash, Mindgame, AquaMorph, and FunSucker. How you’ll be judged will be released in the “BRAWL 2016 Starts NOW!” thread.

Spread The Word!
Spread the word! Use the BRAWL 2016 signature on BricksinMotion. Find it in my sig.

Use the the hastag #BRAWL2016 on social media platforms.

This will be the first Brawl since I joined, and I'm definitely going to enter if I'm not busy that week!

Glad you've kept this going all these years! It's an awesome time and some great films have come out of this! Looking forward to participating again, we'll see if I go as far off brand as I did last year.

Yay! Two contests to prepare for. I stayed out last year, but I'm definitely doing it this year!

Ooh, this is the perfect week. I'll play it by ear see how my S&S project is coming along at this point - hopefully I'll be able to join in!

As will always be the problem with BRAWL, it is already in the middle of another contest. I also have my sister staying with us some time in July and she stays in the room where I animate. If I can, then I will definitely want to enter this, but I'm not 100% certain if I will be able to this year. I hope I will be able to, and whatever happens, I look forward to seeing all the entries.

Nice. I'll definitely try to carve out this week from my S&S schedule. I love BRAWL, it's always a blast.

Yes! Last year was so much fun, I'll definitely participate again this year if I can!

Looking forward to it! I've attempted BRAWL the past two years now--hopefully I can make the deadline this go around.

I still need to work on Darkmoor, and on top of that, I'm going away during that week, which is a particularly rare occurrence for me.

Have fun everyone else.

The Sight and Sound contest.

Brawls back again looking forward to it

I think I'll be too busy with S&S and if not with that The Quixoticals.

So excited for this. Hopefully I'll be able to enter again this year.

That is going to be one hectic week. Hopefully I'll be able to enter.

Currently debating whether or not to set up for brickfilming again.