Well, with how things went with Bob and Randy Episode 2: The Pirate Ship Internship, I've decided to form a plan of sorts for the rest of the episodes. Thought I'd share some thoughts here and see what you guys think!

For those who don't know, Bob and Randy were two characters I came up with back when I was working with another YouTube channel. They showed up in two films called "Pineapples" and "Hand of Solek," but I wanted to do more with them since they were super wacky and off-the-wall. They showed up in "Jeremiah Jedidiah Joe" for a cameo and Bob appeared in "Operation: Family Reunion," but I wanted to do more with them. The idea for a show popped up after I started watching Minilife TV and realized that I could do a series of my own.

So then episode 1 went down, episode 2 went down for Spirit of Adventure, and I've gotten some great feedback! I'm feeling energized and I'm going to continue the trends.

Episode 3 is currently in the works ... well, it's been in the works for a while. I had a lot of ideas for episode 3 but I rearranged them in another order that would work with my brickfilming capabilities at the moment. If it's gonna require some simpler sets (ie: episode 1), then I can do it here on campus. If it's going to require something crazier (ie: episode 2), then I have to wait until I get home.

Until the script is finished, I am hesitant to share something and then be all "wait, wait! It's different now!" So in the meantime I'll share the videos where it all started. Stay tuned for more progress reports! 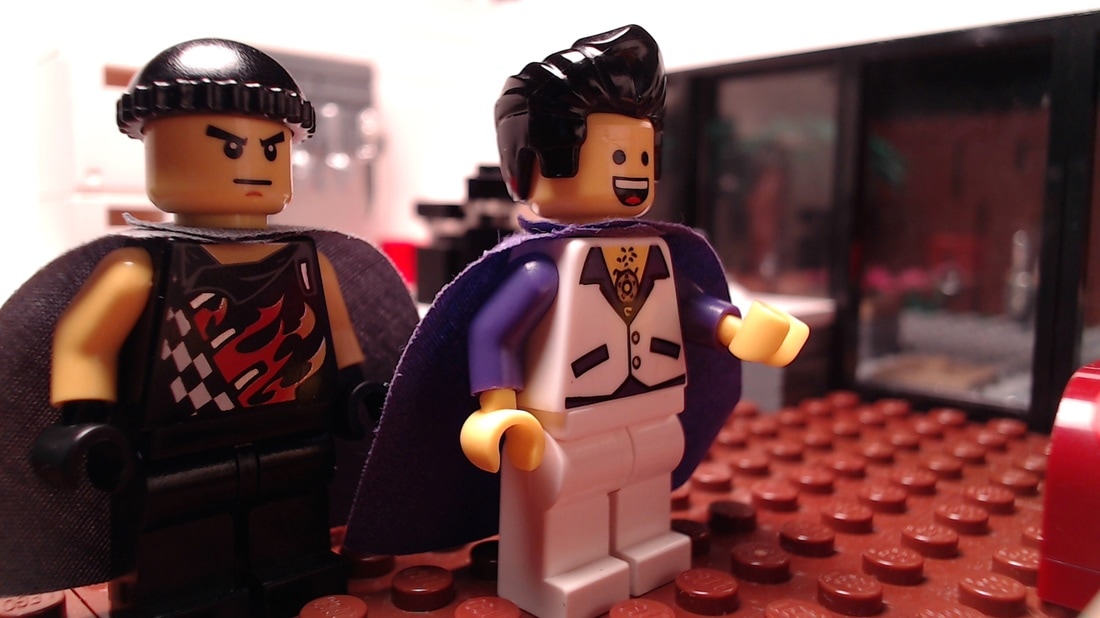 YESSSSSS!!!! Finally, a BTS look at Bob and Randy!

It's such a great series.  One of my new favorites.

Got two updates for you fine folks! I have an updated character list and some remodeling work I've done.

The six main season characters are ...

All six are roommates and good friends. Chris works at GBP Studios, Captain is a security guard, Cedric is between jobs, Willard is a detective, of course, and Bob and Randy will have careers of their own in a few episodes.

I also made some upgrades to the GBP House! Pictures below are of the front deck, the greenery, and the lawn.

The GBP House is basically the center of the show, where the roommates hang out and their adventures often begin. I thought the porch was a little too bare and I wanted green bricks for a lawn, so I picked up a ton of them at a Pick-A-Brick wall and put the house right on top of them all. The flowers are to add some color, the trees remain, and the furniture ensures I could theoretically have all six roommates there at once.

Thanks for reading this update! In the works is Episode 3: I Bought The Illuminati At A Bake Sale. Remember what I said about Bob and Randy and future careers? Oops, I've said too much

Alright, I got my guest voices for episode 3! Recording and filming begin today.

Yay! So glad you're doing more! I've also been wanting to see more of Captain Existential! Looking forward to the rest of the series!

Just found this thread! Super pumped for Episode 3! Can't wait for Detective Willard to show up and cause some mayhem