The Twenty-four Hour Animation Contest, or THAC for short, is a brickfilming competition that lasts for exactly 24 hours. This coming January will mark THAC XVII. All writing, recording, animating, and editing must be done within the time limit. It’s a challenge but it’s a lot of fun!

Check out the announcement video:

Anyone who is a registered member of Bricks in Motion and in good standing before the start of the contest can enter. Judges may also participate but will not be ranked or considered for prizes. Joint productions are allowed but it will be up to your team to divide the prize amongst yourselves should you win.

To prevent cheating, a theme will be announced at the start of the contest. You can brainstorm ideas beforehand, but there is no guarantee that your ideas will match the theme. The theme will either be a single word or phrase.

In addition, “mod elements” must be present in every shot of your film. A mod element is a visual component that must be physically included in each shot of your film to prove that it was made in the 24 hour timeframe. There is an exception however, with a 15 second lineance rule. You do not have to include the mod element for a maximum of 15 seconds. Hopefully, this will allow you to film close ups or other shots where it may be difficult to incorporate the mod elements. Additionally, we want to provide leeway to entrants who forget to include a mod element in a shot or two. In short, if you omit or forget the mod element in a few shots–that’s okay! Just make sure the shots without the mod do not exceed 15 seconds.

There will be two mod elements to choose from–you do not need to use both, you can pick one or the other, or even mix and match them. As with the theme, these mod elements will be announced at the start of the contest. The first mod element is a color mod. This will be a combination of two random bricks that must be connected together or touching. (For example, a green brick connected to a white brick.) The second mod element is a letter mod. This could be any one of the 26 letters in the English alphabet. You may use upper or lowercase versions of the letter, but the letter must be recognizable. Please see the two pictures below that demonstrate the two types of mod elements.

Entries will be judged on criteria including originality, production value (animation, set design, cinematography, sound, etc.), story, and creative interpretation of the theme. Films will be discussed and ranked by the judges until a consensus is reached. The top three films will be eligible for the prize pool. Entries below 10th place will not be publicly ranked.

If your entry places in the top 3, you are eligible for the prize pool! Check out the prizes below! 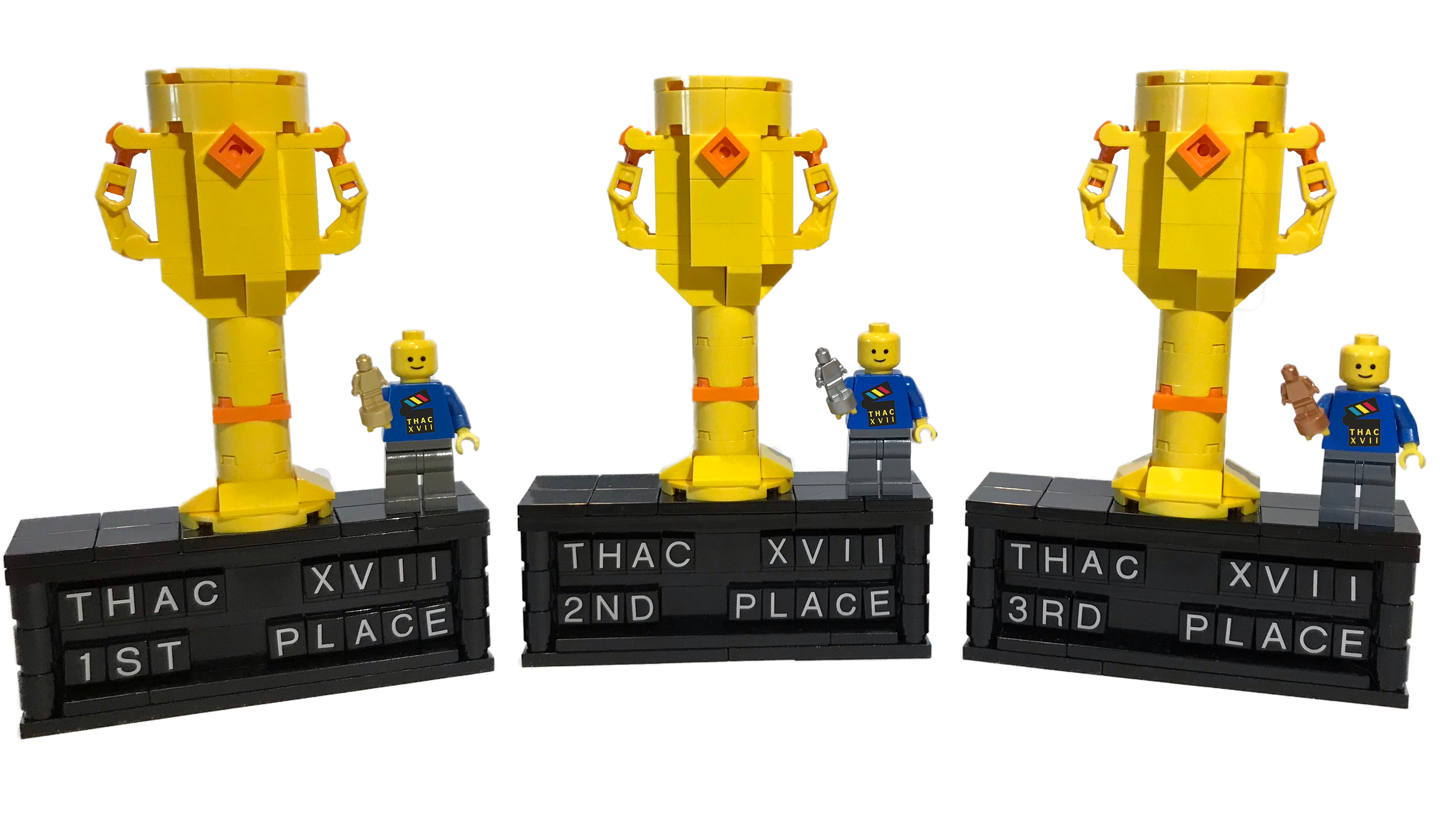 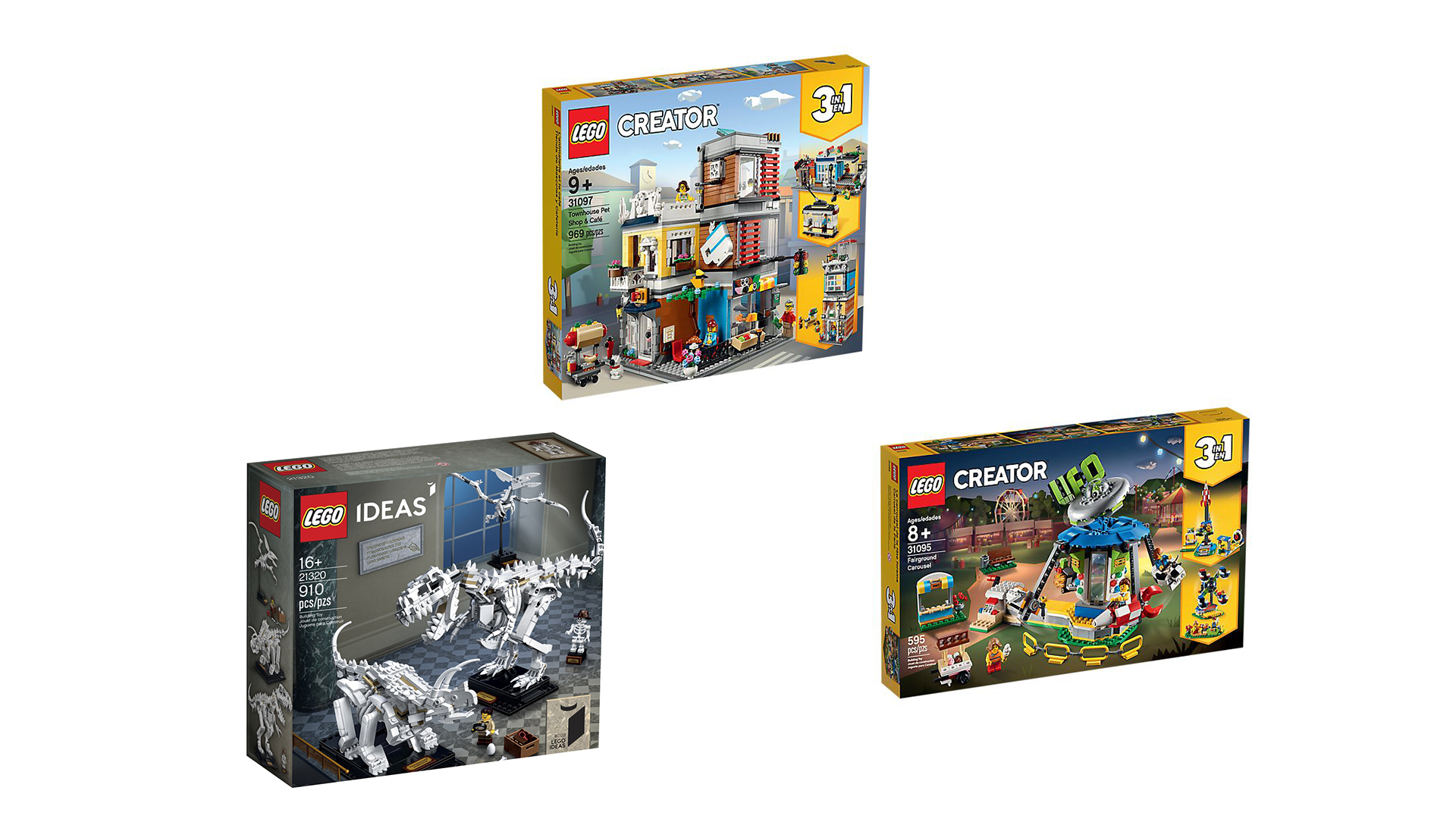 A special thanks to Pongowl for creating the THAC banner and designing the THAC XVII exclusive minifigure!

If you have any comments or questions, please feel free to contribute to the discussion below!

I'm assuming the 2nd and 3rd place trophies won't both have '1st place' written on them.
Anyway, looking forward to it, thanks for arranging as always. THAC THAC THAC!

Yes, the trophies will have 2nd and 3rd place written on them. I've updated the images. Thanks for catching that!

I require that minifig to love. It is my life source. I can’t wait for THAC!

First off, LOVE the updated logo. Something about it is reminiscent of the older ones, yet it's all new and fresh. AWESOME!

Second, holy cow, those custom prizes are amazing! Brick-built trophies are a tremendous idea, and the minifigures are just icing on the cake. Will this become a new standard for future THACs?

Absolute hype!
Trophies are looking awesome, this is gonna be the contest of the century

Those prizes look awesome! Looking forward to participating in this once again!

Brick-built trophies are a tremendous idea, and the minifigures are just icing on the cake. Will this become a new standard for future THACs?

I can't say for sure but we'll definitely try to!

The brick built trophies are so cool - I NEED one of those  , will definitely try to enter

Hooray! I hope I can enter, and if I can, actually finish something too! (unlike last year

I will enter for sure

I am so entering! This will be my first THAC for that matter. Just a quick question, will we be allowed to add minifigures from themes (e.g. star wars, marvel, dc, etc.) i undertsand it is frown upon to make it completely a star wars film, but maybe using like for instance darth vader as a charcter?

I am so entering! This will be my first THAC for that matter. Just a quick question, will we be allowed to add minifigures from themes (e.g. star wars, marvel, dc, etc.) i undertsand it is frown upon to make it completely a star wars film, but maybe using like for instance darth vader as a charcter?

Yes, that would be fine, EPaul.

Hope I can finally enter this year! Prizes look amazing!