can anyone post info on ALL of the BiM contests? so i know when and what they are.

All official BiM contests are announced on the homepage and on social media. If you're referring to SHAC, it's not a Bricks in Motion contest, it's run entirely by Dyland, so the marketing for it is his responsibility. Sorry that you weren't informed about the date of the contest, but you'll have to ask Dyland about that. 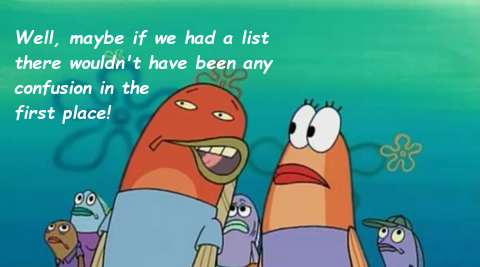 Simmer down everybody, there's no emergency.

2X4, I agree, a general list would be helpful. However, due to the nature of our contests and hosts, hard dates are usually not set until shortly before the event. Also, as Rio pointed out, nonofficial contests are subject to the whims/desires of those that host them, so they can't be predicted.

HOWEVER, I can offer some help. First, a lot can be learned by perusing the "Contests & Festivals" area of the site and looking through those topics. Second, here's a list.

SHAC - Now
*EASTER - Coming soon. (It's in the name)
*The Summer Contest last year ran from June to September. Sometimes that shifts around, but that's a general timeframe.
*BRAWL was held in June the last two years, I'd expect the same this year.
Brickfilm Day has happened in the July/August timeframe the last two years. I'd assume it'll be back again.
There was an unofficial collaboration leading up to Christmas the last three years. I've heard it'll be back again.
*THAC floats a bit, but the last few years has been the first week or two of the new year.

Of course, the Animation Challenge is continually running (or not running, here lately)
Sometimes a September/October contest springs up, but that's not consistent, so stay tuned. In the past, they've been about a month long, but again, there's no telling if/when that might happen this year. As for anything else, I dunno. There are some other film festivals occasionally, and of course the Brickfilmer's Guide awards at the end of the year, but you'll need to just keep an eye out to announcements on anything else.