This thread is a successor to the "Show off a Frame!" thread and is intended for showcasing frames from completed shots from your MOST RECENT or UPCOMING films. These aren't works-in-progress; people posting here have already completed their shots or films and can't change their frames. Keep the guide to commenting on a film in mind when commenting on frames.

The reason this new thread has been created is simple: we want to highlight your work on the Bricks in Motion Facebook page in order to get the word out about some of the great work this community is doing!

By sharing a still from your film in this thread, you are granting permission to Bricks in Motion to repost the image on our Facebook page, properly attributed as your work.]

We won't be able to post every still shared here on the page, but we aim to highlight some images each week.

We look forward to seeing what you guys come up with! 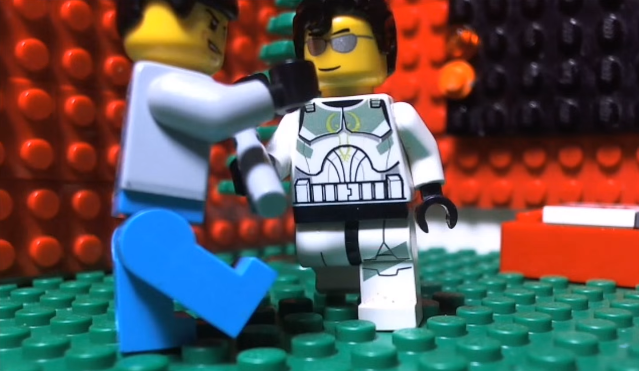 Lovely frame Aquamorph. Still can't say how much I love the use of those monorail track parts for that wall. 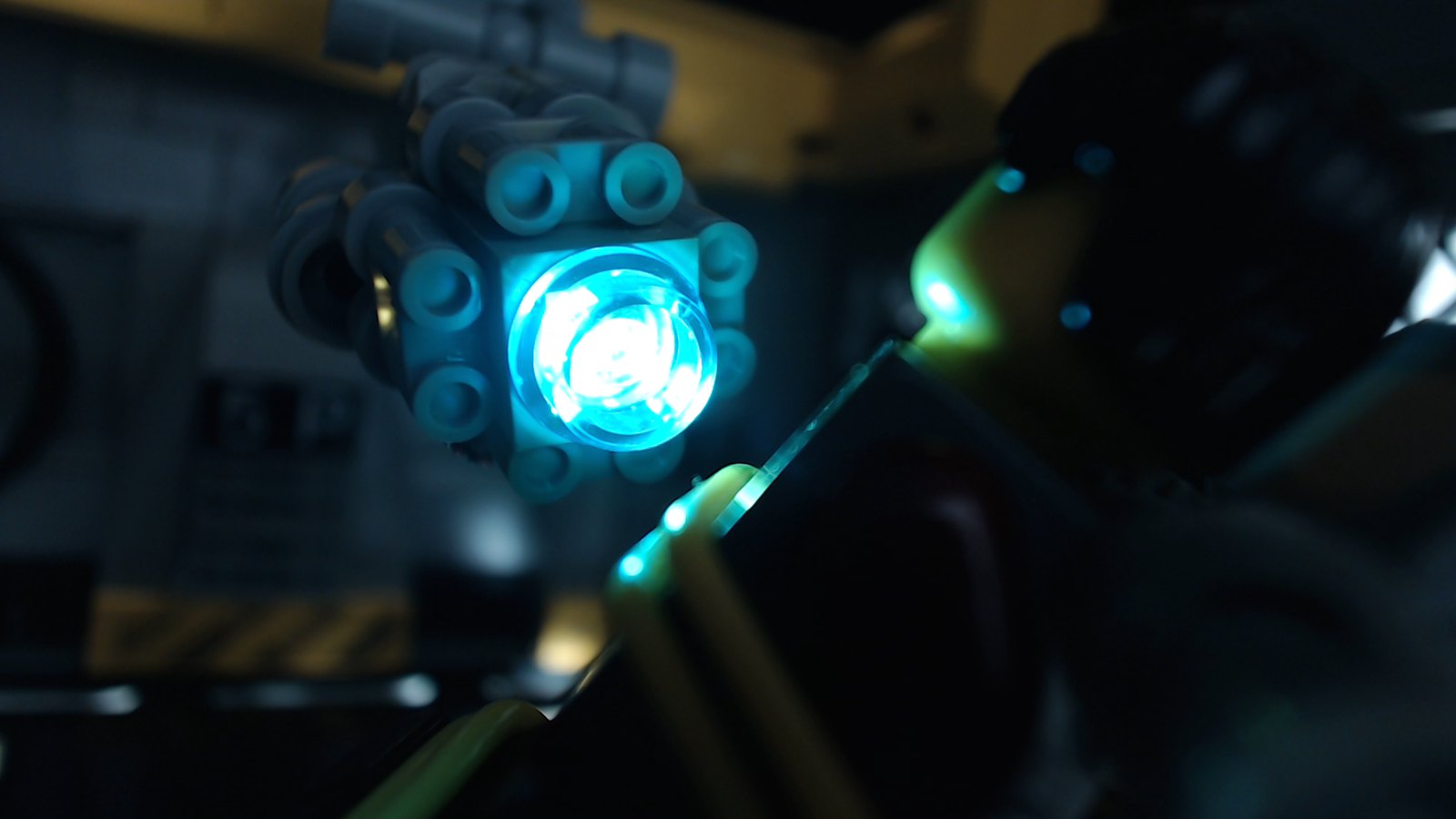 Just shot the first scene of my next film, Lego App Man Episode 1

@Aqua It's very interesting how the hue of that doorway shifts in the actual animation of the film, and yet the doorway itself doesn't seem to shift or wobble around like how the door from Magic Portal does.

It deems as of the hue of the door itself has been shifted, and yet even the tiny reflections of the door in random bits of plastic around the set still shift hue as well.

How did you manage that?

Also, I have a question Smeagol: what if our frame is basically finished, however, we think that it might not exactly be the final frame because we might go in and edit the brightness or contrast or colours just slightly?

A frame from my next Lego movie. I attempted to make it look underwater. Shot with a webcam.

@bigbubba, that looks pretty cool.  I love the Lego pieces used as bubbles and the depth of the shot.

Plus, the squidman minifigure is awesome.

thank you. I have some under water shots coming up and was at a little bit of a loss as with what to do....

Here is one from my latest brickfilm :

Here are a few frames from my most recent completed film: Holding Our Own Episode 3 Church scene.  Carleigh (voice by Jakunen Neesan) in a pew Image 42211. Brent talking with the store clerk (voice by “Uncle Sluggo”).  The two store items on the counter are Lego Modulex bricks. Alien soldier in a manifest gate.  Since I don't do any masking effects in this series, I use clear elements to make characters or props appear airborne.

I like the idea of the redesigned thread, though I'd suggest having a rule like in one of the old threads that you should wait until a frame has two responses before posting another image. Almost nobody is providing any kind of a response.

@Funmiproductions The framing is a little off and you could do with making your sets a bit more detailed in future, but I'm still intrigued to see where you go with the next Hollow Earth.

@Aquamorph that's beautiful. Very nicely framed, and the colours make the doorway stand out without being glaringly so. It's there, and it could be part of that environment, but it's still somehow otherwordly. The only thing that's a little odd is what looks like artifacting on the door frame, a sort of posterised effect, but that might be intentional, I don't know.

@Brickcrazy I saw this the other day. I know this thread's for individual frames, but the way you animated that overhead, Glados-style robot was awesome. Is that a Brickstuff/Lifelites LED inside?

@William Osborne the set is nice - I always like it when people make bookshelves that way - though the decal on the central minifigure is a little bit off. It looks like the decal might be too big for the torso. The design is good, although the buttons are more like ovals than circles. Personally I've always found white minifigure decals to be annoying, since paper is, well, white, while white Lego pieces tend to turn yellowish over time. I have no idea how to solve this issue though, and it's something that annoyed me when animating Moon Knight for my MBU Christmas special. Still, aside from the size I think you did a pretty good job.

@bigbubba I'm guessing this is Squidman Origins episode two? I really enjoyed the first part, and this frame definitely has me pumped for the second. How did you have the studs hang in mid-air? Is it masked?

@Aiwha Nice framing and use of colour. Went and watched the brickfilm too. Very cool. I also like the choice of face you used for the thief, it's very smug and confident.

@HOO I think the last frame would definitely benefit from masking. Clear bricks can work, but generally only if they're less visible, whereas this still stands out. And interesting use of Modulex bricks! I don't remember seeing them in a brickfilm before.

It may not seem like much, but even if you're posting an image, it might be a little prudent to start your post with a comment about the image before yours. Just a few words; not a critique, that's not what this thread is for, but just a little appreciation to make the recipient feel warm and fuzzy (or not) about their work. I'm sure we'd all want a comment in return, and for me at least I'd post here because I want to share something I'm proud of. I don't want to sound condescending, but this struck me as soon as I saw the new thread. Still, I like the idea of the images being shared around on social media. BiM is quite enclosed a lot of the time; this is a great way to raise awareness for the community here.

Jampot yes this pic is for the second episode from that series. All the bubbles had supports that were then masked using GIMP.

I like the idea of the redesigned thread, though I'd suggest having a rule like in one of the old threads that you should wait until a frame has two responses before posting another image. Almost nobody is providing any kind of a response.

While writing reviews on frames is acceptable, it's not mandatory. Requiring a frame review just causes un-needed complications. Sure, it's nice to say a little thing about the frame above you if you want, but it's not the point of the topic. It's for posting frames for people to see. If you like writing frame reviews, go right ahead, but remember, if you post critiques, you need to keep in mind that the critique won't help that specific finished frame, but it should be meant to help them in the future. Though, if they have finished the film, the review should be posted on the film topic instead of here. However, even then, the critiques should be minor, because if people are looking for critiques, they should post their frame to the Critique my Frame thread.

I really have to agree with rioforce here. The primary purpose of this thread is to show off frames that really don't need feedback (though of course there's absolutely nothing wrong with providing it), as well as to provide material for the BiM facebook page. Besides, forcing mandatory feedback would probably greatly reduce the quality and sincerity of that feedback.

@Brickcrazy I saw this the other day. I know this thread's for individual frames, but the way you animated that overhead, Glados-style robot was awesome. Is that a Brickstuff/Lifelites LED inside?

Glad you liked the animation. It took a bit of work to get it to look right. As to the lighting, I used a Brickstuff LED light.

I don't see it as mandatory feedback, just common courtesy. Like I said, to me the purpose is to share something you're proud of, and it's nice to see a reaction. There was more of that in the old topic.

It's only a suggestion though. And please don't feel your need to point out the Critique My Frame thread, I'm well aware of it and mentioned the difference in my intentions in my own post

Also, I have a question Smeagol: what if our frame is basically finished, however, we think that it might not exactly be the final frame because we might go in and edit the brightness or contrast or colours just slightly?

I can't speak for Smeagol but for the purpose of featuring your pic BiM's Facebook page, it's okay if it's not color corrected, filtered, etc.  If riggings, wires and greenscreen are still in the shot, however, those should be shared on a different thread to begin with.

I agree with jampot that it'd be nice if people left comments; the rules on this thread are intended to be identical, and indeed are the same, as the one it replaced (Show off a frame!), so it might be good if it's not an endless string of picture posts with nothing else to it.

This thread isn't just intended to mine cool pics for the Facebook page from the community; it is intended to serve the same purpose as the thread it replaces while allowing us to promote the work being shared here without obtaining permission for each individual image we like enough to share. (Which, given the infrustructure of Facebook, by its nature entails reuploading the photo there ourselves and requires the creator's permission.)

I agree with Lech regarding your question, Squid.

Probably my favorite frame from my latest video

Wow Galactic Films, I love that frame. The lighting is just perfect, and I really like how her speeder looks out of focus in the background.