Now I feel bad for just throwing together a basic set for this thing.

I am, however, suffering for spending so much time on sets.  It's taking a lot of time, and I won't be able to start animation as early as I'd like to, which is unsettling.

Oh god, look at all the people with finished scripts we aren't even halfway done with ours.

I've set up a proper casting call (sort of).  So check it out if you're interested.

Don't feel bad about wasting time on sets, I can't make sets or animate until I get back on Wednesday.

Anyway, Squid gave me a pretty ridiculous idea that I think I'll roll with.

I might be able to animate. But, it will have to be Thursday evening, Friday night, and all of Saturday. Jeepers! I know, it's risky! But maybe, I'll finally be able to get my name on the results list this year.

I like that bridge.  It has a very nice look to it.

That white wall is so huge and kinda old looking.  It somehow looks creepy.

Voicing is pretty much all done, set building is going well. I just reallyreallyreally hope my computer is back soon so I can start animating.

I'm about to start scripting my entry, and in the afternoon I'll put the voices together.

I'm about to start scripting my entry, and in the afternoon I'll put the voices together.

If you need voices let me know, I'm on a role at the moment.

I've got most of my script done, I think I'm gonna start building some sets now.

Right now, I'm voicing every character in the film besides the narrator.
I had tried to contact some specific individuals, but they've so far been unable/unresponsive.  So I'll probably have to stick with it.

I'd volunteer for voicing the narrator, but I, alas, have no working mic at this point.  If I by any chance happen to get a good working mic within the next few days I'll be sure to let you know, though (assuming you would like me to voice, of course).

Incidentally, I really like those shots you took, especially the second one.  The tavern set looks good too, though I'd recommend adding another plate to make the horizontal beams thicker, to give it the proper half-timbered look.  I'm also really looking forward to this film, the title alone sounds awesome (though Odoriferous is a somewhat unusual title choice for a brickfilm, considering most minifigs don't have noses).

Legocloniac:  I'd suggest going for the middle/"main" 'fig's hair, or the grey one just to the right.

Pritchard:  I like the bridge.  The huge white walls look a bit odd though, and the bricks don't look like they're pressed together tight enough, which makes the wall look rather "gappy".

Wow, you guys have built some nice sets!

Here a frame from me: 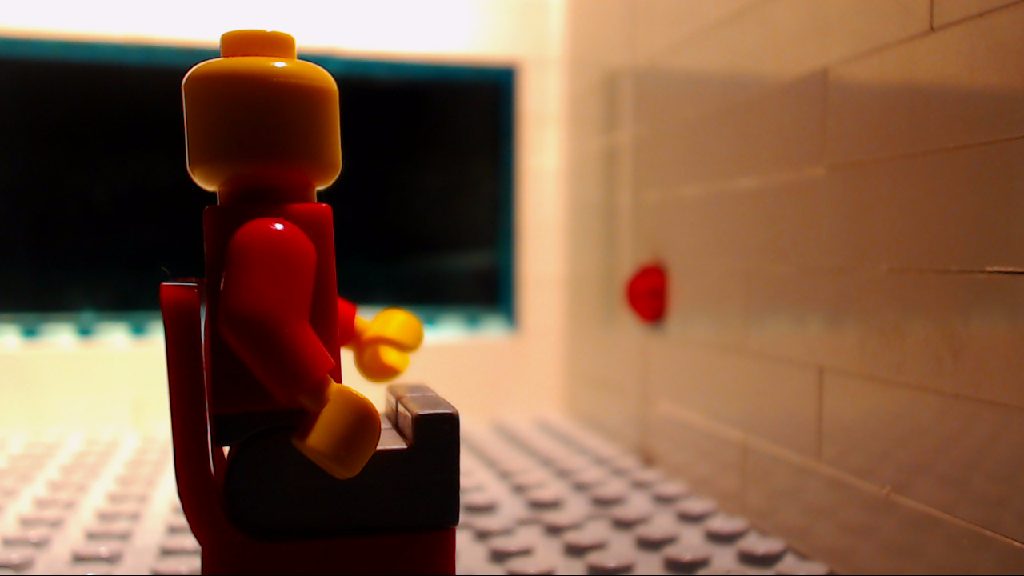 Looks good Isaac. The highlight along the edge of his head looks great!

I've got my script done and I'm really happy with how it turned out. Hopefully I can start on the sets today.

We've also had a Skype call going for about 27 hours non-stop. It's a lot of fun.

OK so I came up with a different really stupid idea but I have no idea what should happen int he plot.

Also that lighting and quality is beautiful, what camera are you using?

I'm one shot in and I've got until Wednesday to finish this. This should be good.

I've got the script up, voices nearly ready, so I might be able to start animating tonight, Tuesday, Wednesday and spend all of Thursday cleaning up the shots.

I spent all morning cutting lines from the tracks I recorded last night, but it's done now.

Unfortunately, I may not ever get to animation today as planned, I still need to time the lines for frames, and that one set still needs some work.  Gabatay with this.

I have added a character to the casting call